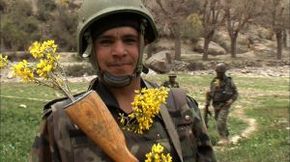 The Last Outpost: Afghanistan tells the story of the U.S. effort to build up the Afghan Army, the only real exit strategy. Shot from the ground and on the frontlines, the film chronicles the war through the portrait of two Afghans and an American soldier in an embedded team of 130 Afghans.

The two cinematographers-directors, Tim Grucza and Yuri Maldavski, spent one month and a half with the soldiers in a tiny outpost, by the Pakistan border, looking into Waziristan.

Ultimately, the film is a look at the absurdity of the war and the impossibility of the fight. It will also explore the psychology, motivation and identity of two people fighting a common enemy but radically opposed in their cultures and ways of life.